This introduction briefly describes the data on corporate income tax systems that has been collected by the Oxford University Centre for Business Taxation and is now available on this site. It provides a detailed information on all the variables available, the country and year coverage. Since the development of the database is an ongoing work, more information will become available over time. This note refers to the state of the database as of January 2017.

The CBT database builds on an existing database which has been created in 2006 as a multi-country database and developed over the years by various Research Fellows at the Centre, and earlier at the Institute for Fiscal Studies. The original version uses various sources such as OECD Tax Database, IBFD (International Bureau of Fiscal Documentation), World Tax Database from the University of Michigan, KPMG and E&Y and covered mainly OECD countries. The data currently in the database comes from various sources, mainly from:

We update the database each year to make it consistent with the most recently available information. We aim to make sure that the all the information included in the database applies in 1 January of the given year. Therefore if the tax year is different than calendar year, any reforms introduced in a given tax year that started after 1 January will not appear in the data until the following year.

This brief description is organized as follows: section 2 lists all the countries covered in the sample, section 3 explains in more detail the features of each of the variables and what they comprise of. Section 4 explains how to obtain the data from the database and who to contact in case of any queries.

The years covered span the period 1983 – 2017 for most of the countries, some data is available for the period 1979 – 2017.
Additional data for Bulgaria, Bosnia and Herzegovina, Croatia, Romania, Serbia and Ukraine is provided for years 2004-2017.

Note: The local business tax in Canada for years 2011 and 2012 has been changed from 13% used in the CBT Corporate Tax Ranking 2012 to 11.75% according to suggestions received upon the report publication. 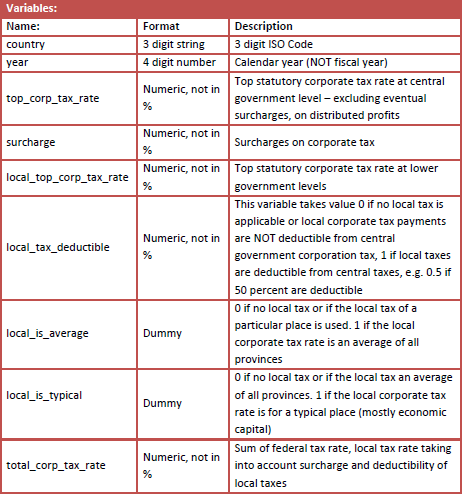 The corporate tax base worksheet includes information on the depreciation rates and types and inventory valuation method. It describes three assets: industrial buildings, plant and machinery and intangibles (patents) and for each of those it has information about depreciation method (either straight line, declining balance, declining balance with a switch to straight line or any variation), depreciation rates and number of years over which the asset is permitted to depreciate. It also includes information on the method of inventory valuation, which can be either last in first out (LIFO), average or first in first out (FIFO). Where more than one valuation method is applicable the most preferable method was chosen (we prefer LIFO over average over FIFO).

Sometimes, for certain assets, data was not available for depreciation rates and methods or else it was stated that depreciation must be computed in accordance with the statutory useful lives of the assets. When this occurred we make assumptions as to what are the useful lives of all three assets used in the database. They are as follows:

The depreciation rates were computed accordingly. 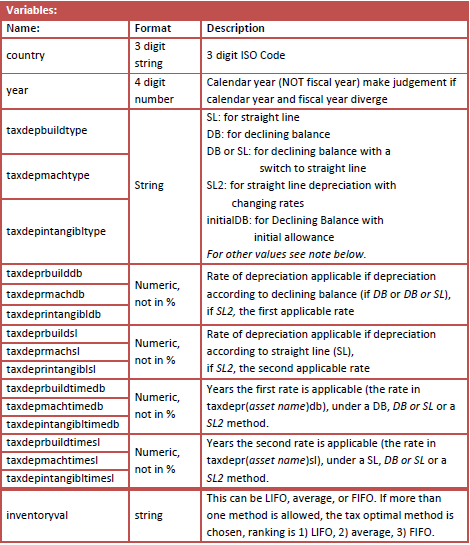 SLITA: In Italy in the years 2002 – 2007 there was a special additional depreciation available for industrial buildings and plants and machinery. It was additional double depreciation for year 2 and 3 at twice the SL rate.

The EATR and EMTR worksheet includes measures of the both effective tax rates. The file consists of columns describing country code, year, EATR and EMTR. For a description of the methodology and the assumptions used in the calculation of the EATRs and EMTRs please refer to Appendix A in the CBT Corporate Tax Ranking 2012.

The database consists of a single Microsoft Excel file with three worksheets corresponding to the information described in Section 3. If you have any queries regarding the information in the data please email: cbt@sbs.ox.ac.uk.