There is no longer any debate about whether some multinationals avoid taxes by shifting profits overseas. According to Tørsløv, et al. (2018) the amount shifted annually is approaching $1 trillion. What is less well understood, however, is what happens to the money not spent on taxes. Put simply, if shifting profits leaves more money at the firm's disposal, where does it show up? In Alstadsæter, et al. (2022), we use matched employer-employee data from Norway to investigate one possibility: that at least some of it ends up in workers' pockets via higher remuneration.

As a first pass, we compare the wage distributions for shifters and non-shifters below. Given differences in skill levels, we do so for both high-skill and low-skill occupations. As shown in the Figures, the wage distribution of profit shifters is to the right of non-shifters, i.e. they pay higher wages. This is especially visible for the high-skill occupations, particularly those who are paid the most. 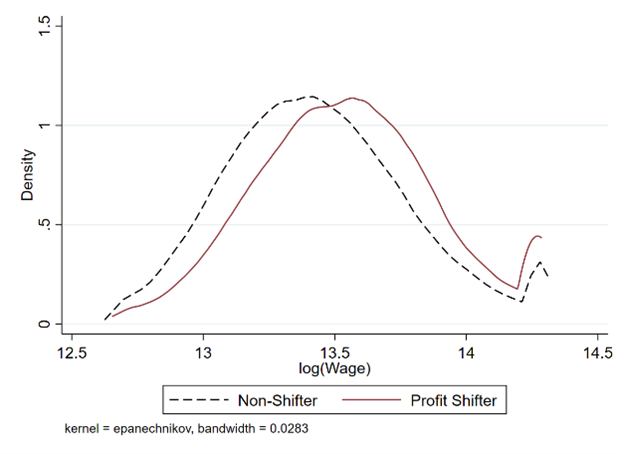 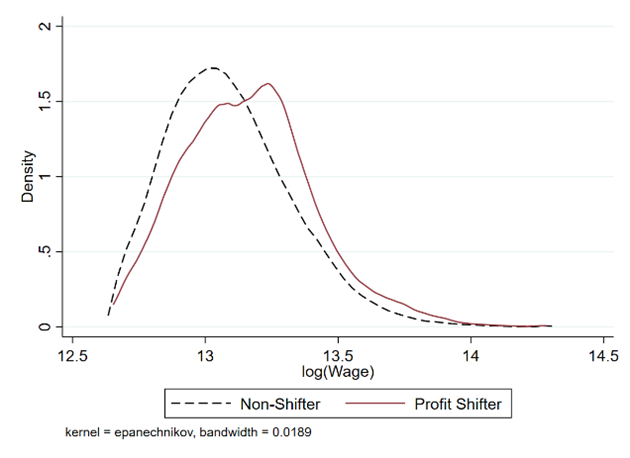 This comparison, however, does not control for other factors that may affect wages. To account for other factors, we turn to regression analysis. In doing so, we also differentiate between manufacturing and services, on the grounds that intangible assets may play a significant role in profit shifting, implying that firms in services may find profit shifting relatively easier.

For services firms, our estimates suggest a 2% wage premium for the average worker. In contrast, we find no significant wage premium for the average worker in manufacturing. We perform a number of tests of these results to ensure they are robust; for example, these tests confirm that the wage premium is associated with having a haven affiliate, not simply being a multinational. Since moving profits to a haven only makes sense when the recipient is affiliated with the sender, this reinforces that the link is between wages and profit shifting.

While this initial foray only finds a significant wage premium in services, this is an average effect across all workers. When we allow the wage difference to vary by occupation, we find that managers, professionals, and technicians earn about 5% more when working for a shifter, a pattern that holds for both services and manufacturing. In addition, even when compared to other managers, CEOs enjoy a markedly higher wage premium. Thus, even within a firm, profit shifting is associated with greater income inequality.

As an alternative way of comparing across workers, we use their wage level rather than their role in the firm. For services, the estimated wage premium across the wage distribution is illustrated in the figure below. The estimates find no significant wage premium until the 85th percentile, i.e. wages are higher only for those already in the top 15% of the wage distribution. Again, this suggests that profit shifting benefits the highest paid workers and contributes to inequality. 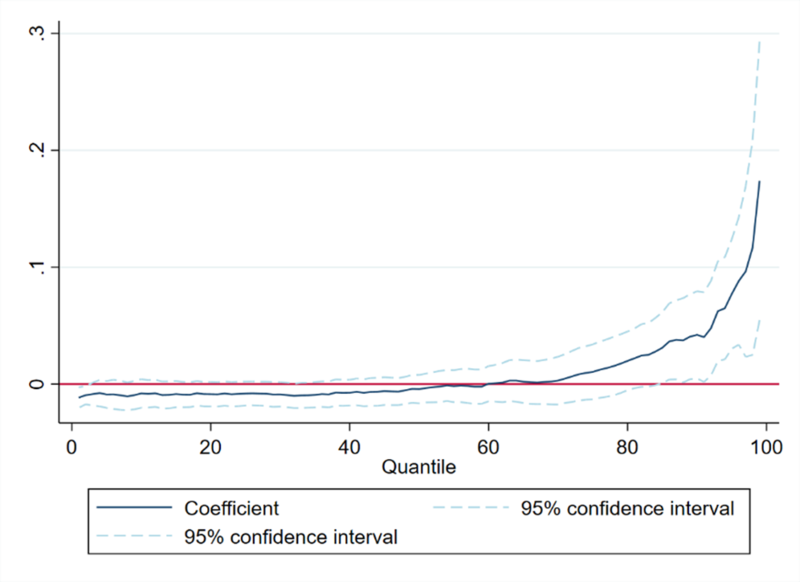 What then do these higher wages mean for government revenues? Using a back-of-the envelope calculation, we estimate that in 2018 profit shifting led to an extra 450 million NOK in wages which itself would have generated an extra 273 million NOK in income and social security taxes. That increase, however, only offsets 12% of the estimated corporate tax losses due to profit shifting. Our overall conclusion, then, is that not only does profit shifting result in a significant revenue loss, without much offsetting effect through other taxes, but it also increases inequality.

This research is reported in full in