The impact of CFC rules

Typically, jurisdictions use a tax rate threshold to identify low tax jurisdictions (and hence subsidiaries). The figure below shows an adjusted measure of profit (left axis, filled circles) around this threshold for subsidiaries of parent companies in a number of countries including Germany, France and the United Kingdom. It is evident from the figure that profit rates are significantly higher in jurisdictions above the threshold, suggesting that multinationals tend to report less income in low tax rate jurisdictions subject to CFC rules. The figure also shows the tax incentives around this threshold which ultimately generate this response (right axis, hollow circles).

The paper also presents evidence that new subsidiaries tend to be placed in jurisdictions that are not subject to CFC rules, suggesting that the rules affect the location of both profits and real activity. These results suggest that CFC rules are therefore an effective tool.

Adjusted measure of profit for subsidiaries of parent companies 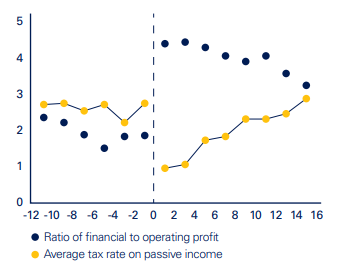 Sarah Clifford, “Taxing multinationals beyond borders: financial and locational responses to CFC rules”, CBT Working paper 17/18. Sarah joined the Centre in September 2018, after winning the prize at the CBT doctoral meeting in September 2017.