Enforcement of taxes depends on the veracity of the information received by the tax authority. In many instances there are forms of third-party reporting – for example, employers report payments made to employees. There are also examples that combine elements of self- and third-party reporting, where taxpayers self-report to the tax authority but must file documentation issued by a third-party to corroborate their claims. This enforcement policy is globally widespread and is used by the United States, Germany and France to deter taxpayers from over-claiming deductions.

This research project investigates how taxpayers respond to this form of hybrid reporting. We use data from the Republic of Cyprus where this policy is used for the purpose of checking deductions for charitable contributions. To avoid large administrative costs, Cyprus sets a lower threshold for deductions so that only if a taxpayer claims more than this amount are the reporting requirements activated. This threshold varies across taxpayers depending on the level of salary income. The Figure below shows average deductions claimed compared to salary income. The dotted lines illustrate the points at which these thresholds increase. This means that a taxpayer above the line can claim a larger deduction without providing documentation compared to a taxpayer below the line.

As the Figure below clearly shows, taxpayers respond very strongly to the activation of this enforcement policy. The research project finds that, when taxpayers can claim £1 more without documentation, deductions increase by 70 pence. It also finds that a very large portion of this response is a pure reporting response and is not related to actual charitable giving. 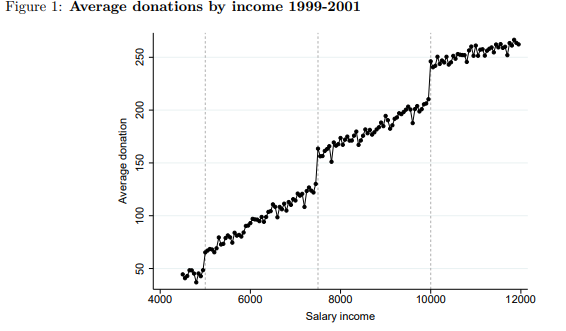