Many countries use tax credits in an attempt to stimulate private sector spending on research and development (R&D). The value of those credits in terms of the additional R&D undertaken in return for the foregone revenue cost is an important tax policy issue. This has been the subject of a considerable research effort in the CBT.

This paper used confidential UK corporation tax returns data made available in the HMRC Datalab to study the impact of a 2008 reform that indirectly made more generous R&D tax credits available to many additional mediumsized enterprises, when the official definition of ‘small and medium-sized enterprises’ was changed. The quasiexperimental research design placed the medium-sized firms that gained access to the SME scheme only after the reform in the ‘treated group’, while firms just above the new threshold with more than 500 employees were placed in the ‘control group’.

Controlling for other factors around the time of the reform including the global financial crisis, the researchers have found that the treated firms (employing between 250 and 500 employees) increased their R&D spending by around 30 percent. This increase implies that the reform generated around £1 in R&D expenditure for every £1 foregone in corporation tax. The researchers also found that the effects differ between different types of firms.

The reform expanded the definition of SME for R&D tax credits. Below, the thresholds for eligibility to the SME scheme before and after the reform 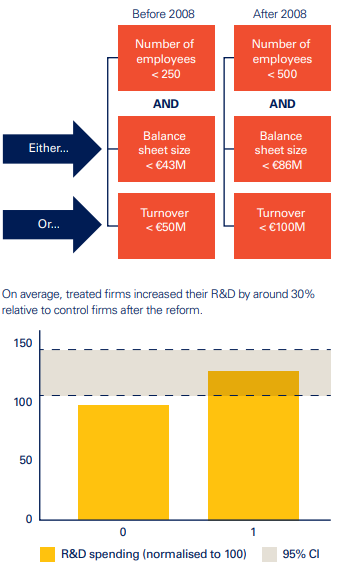